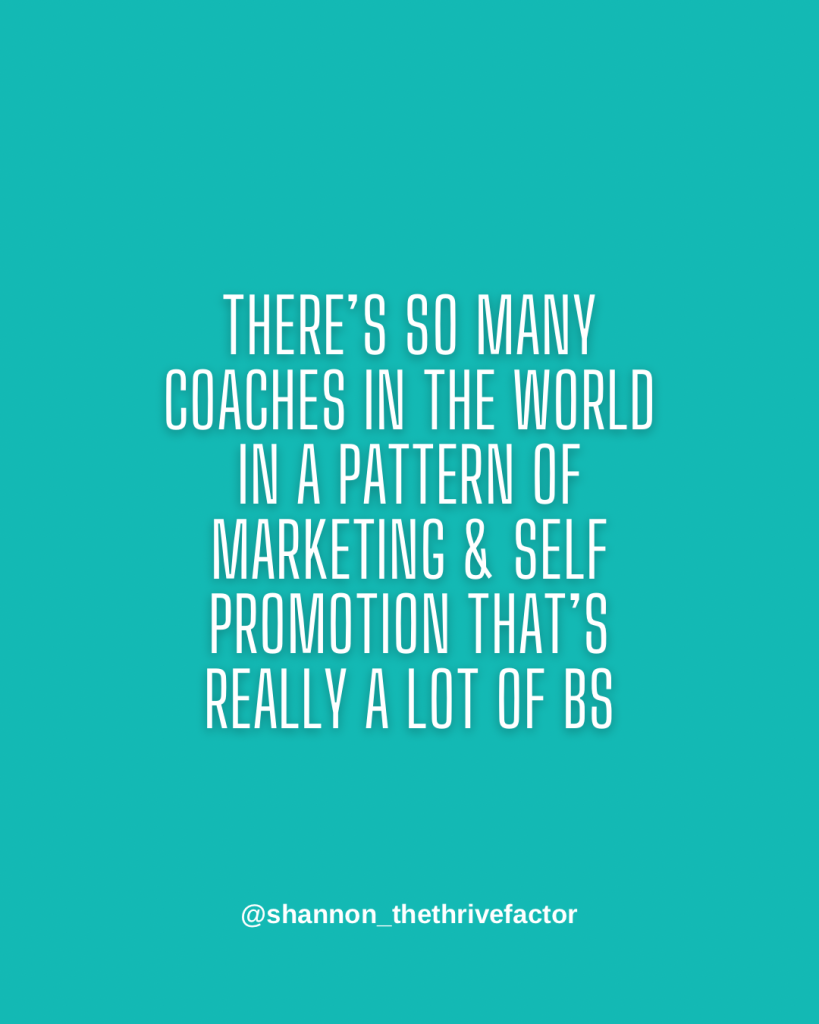 Hear me out with this one... it is a well informed observaion I had to share.

There are so many coaches in the world in a pattern of marketing and self promotion that’s really a lot of BS.

These coaches have been told to imagine what life will be like WHEN they reach the success they want. They’re told to live that life now. They’re told to invest like that future version of themselves. To make decisions like her. It’s a big amplified version of “fake it to you make it”.

This is useful to get clear on what you do want as a motivation to move forwards to that future.

But here’s where it goes wrong. The first of the reasons I felt called to share. There are an additional two reasons below.

➡️ If your current situation is worlds apart from that future, the gap could be too big for you to believe you’ll get to that place. Or anywhere even close. This can create and feed all kinds of beliefs and behaviours that you’re not enough, a failure, not worth it. All BS

I feel a solo pod episode coming up on the podcast about the ways I see the coaching industry doing wrong by us all.

This has been bubbling away within for a bit. Probably longer. Here I am admitting it. And saying thanks to coaches like Simone Grace, who has again called this kind of thing out with her post on “proximity” as a strategy coaches use to get clients.

“Oh this is, again, so refreshing to read. The crap out there modeled as what’s possible is full of BS. If you really want the private jet thing fine, but is that seriously the goal? Not for me. I want to create impact, give back to the world, leave a meaningful legacy. To thrive in a stable and genuine way. On my terms. That’s what my agenda is for starters. And goes deeper in a compassionate, conscious, intentional way”

This 👆🏼- is what I want to and do model for my clients. Not something that makes them ever feel they’re failing/not enough because they’re measuring themselves against a false reality!

Here’s to being part of industry change and saying when somethings not ok. It’s a good thing to not agree with what others model as the pinnacle. Trust in your instincts and if it’s not for you, focus on listening to yourself and following you. In fact prioritise this.

My additional 2 things to think about

➡️ If you don’t have the financial means to invest like a future successful, wealthy you, then you could create a threat to your security that you may not be able to work through.

I’ve done that in the past and instead of making the most of that massively uncomfortable investment I felt in increasing threat and a large amount of my focus, energy and time went into surviving. Not thriving.

It also played with my beliefs big time and raised a lot of deep subconscious things I was unaware of. I got clear on what they were and have worked through many whilst also working with my shadow self. So that’s the gift that came from the investment. It didn’t lead to much in terms of change in my business though like it “promised”. More to unpack with this one for sure.

But my point is, if you legit do not have the money it means nothing bad about you if you don’t stretch yourself to a crazy extreme to invest. Unless you make it mean something

➡️ What about this… what if you don’t want to fly in a private jet, only buy and wear labeled clothes and have expensive cars and handbags to prove you’ve got money and suggest it’s because your business is a success?

Legit, some people don’t want these kind of things. I think more people than would be honest enough to share this as their truth.

Not everyone wants a flashy, luxury lifestyle and that doesn’t mean they’re not ambitious or don’t have what it takes to be a success. It’s a BS reality the coaching industry is creating that says those things are signs of success. For some people maybe. Not for all of us.

Here’s to being part of industry change and saying when somethings not ok. It’s a good thing to not agree with what others model as the pinnacle. Trust in your instincts and if it’s not for you, focus on listening to yourself and following you. 100% prioritise this.

What’s not ok that you want to speak up about? I’d love to know.

DM me on Instagram if you want to share your personal experience. I love sharing anonymous stories on my podcast.

Discover all the ways to connect and work with Shannon here - social media links, latest programs, podcast interviews, free resources and more
Book a time to chat with Shannon about ways to work with her to turn your wisdom into profit, thrive without the trappings of unhealthy hustle and make your impact as a business woman

Have you tuned into the latest episodes on the She Leads She Thrives podcast yet? Access them all below

Access all episodes of She Leads She Thrives Podcast here

Hey superstar! I’m so happy you are here checking out one of my fav online homes. As a Business Coach and Teacher, my mission is to help wise, enthusiastic, freedom loving women take their ingeniousness (their smarts, expertise and experience!) and package it into a thriving, profitable, meaningful business without the hustle, self doubt or complexity you’re told is necessary to make money, an impact and create a life you truly adore and celebrate every day. - - - - - - - - - - - - - - - Learn more about coaching with Shannon here

With the huge success since launching She Leads Sh

It’s been too long between She Believes poetry s

I remember when I first thought about being a busi

In this new episode, I talk with the mystical Homa

Having spent a lot of time dedicated to DEI learni

There’s a shift happening in the business landsc

These 5 focuses underpin every aspect of your Prof